Modeled by Jerome Renaud and painted by J.J Flahman

Modeled by Jerome Renaud and painted by J.M Palomares
More images at http://www.knightmodels.com/gambito.html

Modeled by Jerome Renaud and painted by J.J Flahman
More images at http://www.knightmodels.com/msmarvel.html
All of them with the usual package and measures (70 mm)...
The sneak peak is a wonderful Han Solo resting in the Mos Eisley cantina...

Edgar Ramos, from Mad Puppet Miniatures has created a limited edition mini. This miniature is only limited to 399 Worldwide, the first 100 castings are available exclusively from CMON shop.

Greetings to all.
This month we bring you two miniatures very consistent with the magical month we are. 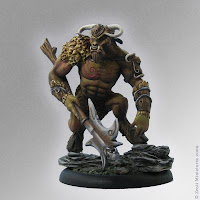 First of all we have the Uro. A creature born from the spirits of the forest. A spirit that inhabits the body of an human being. Even the most valiant enemies of the Cult of Thousan Faces will escape from this monster. This mastodon, whose humanity is barely recognizable, serves the Grand Priestess with devout fury. Keep his enemies away from his blade, being as monstrous as it is. 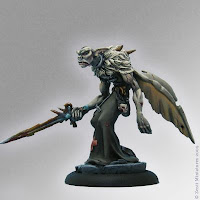 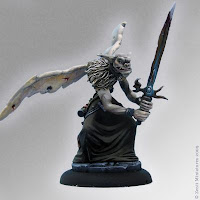 On the other hand we have the Gargoyles. They are the most advanced members of the non-living in their research of final incarnation. Born at the image and likeness of their creators, the Serifan, they are the damned elite of the non-living. The only non-living that were abled to be embodied in a living body, but condemned to an imperfect shape and sentenced to not being able to die. They're trapped in their carnal forms and will never stand in their final incarnation with all his brothers. Therefore they discharge all their anger and their hate against the living. They walk on the battlefield enduring injuries that would make a giant die, and destroying everything that comes across their way. But they are not invincible. Because their meat is mortal and they can bleed, and their bones can be broken. And the Gargola will remain inert, unable to breathe, unable to move ... but aware of everything that happens around him. A curse really shocking.
Each Gargola will be 8.50 euros and the Uro is a limited edition (100 units) on metal at 13.95 euros. This last one stands 5.4 cms and comes with a scenic base.
Publicado por Sargento 100% Algodon en 1:11 PM No comments:

Avatar of War guys have sent me this mail:

We've just released the Vampire Countess set. The picture here shows only one of the several different options, allowing putting together a fighter/spellcaster vampiress by choosing from optional weapons, heads and the vampire pets.

The mini has been sculpted by Edgar Ramos and Felix Paniagua with conceptual art from Des Hanley.
Publicado por Sargento 100% Algodon en 1:08 PM No comments:

Copied from Roberto's blog... It is for an Italian company but worth sharing... 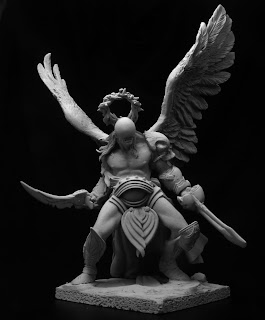 Hello this is another sculpture I made for the mark Pegaso Models. It is called Arkvenger. From a concept of Andrea Jula. Made with magic sculpt, 75mm. I hope you like it.

Some cool concept art for the Non-dead faction of Nemesis, the game of Zenit...

And the final version scultped by Raúl Fernandez...

Angel Giraldez has done a wonderful job with this figure that I talked some days ago... only one of the weapons possibilities...