Someone asks me about the Avatars of War new game and Ignasi Ferrer, Studio Manager of Avatars has sent me some info: 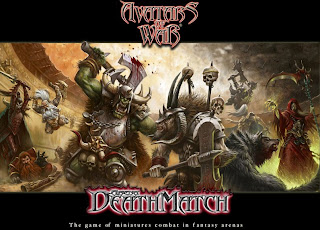 Arena DeathMatch: The game of miniatures combat in fantasy arenas.
Avatars of War: Arena DeathMatch is a 28mm miniatures game that depicts the bloody clash between two or more bands of heroes facing off on the floor of the arena, in front of a raucous crowd that is thirsty for action, violence and death. This deadly contest is known as a deathmatch.

The most powerful heroes among the mortal races are known as the Avatars of War—heroes chosen by the Gods of War themselves. These Avatars, in addition to being fierce combatants, are able to draw upon the silver of divinity within their souls for the power to expand their already awesome combat abilities.

In Arena DeathMatch, each player controls a band of Avatars of War as they face off on the arena
floor in front of a cheering (or jeering) crowd.

The perils of the Arena stand against you: traps, hazards and even savage beasts stand between you and your opponent. The door to the Arena opens, and the shouting crowd is eager to see their favourite heroes fight to the death.Will they be cheering your victory... or your death? There’s only one way to find out!

Arena DeathMatch games are played to a number of points which state the the size of the game: that is, the total amount of gold coins (gc) that each player can spend to recruit and train his Avatars of War. For example you can play a 750 gc deathmatch, a 800 gc deathmatch, ...

Commonly, each player will recruit between four and seven Avatars of War for his band. Recruiting and training your Avatars of War is an important part of Arena DeathMatch. You should now spend some time reading the rules for each Avatar of War in the rulebook and considering the possibilities and combinations available. The Arena DeathMatch band maker is a perfect tool to experiment different options for your band.

You can choose the Avatars of War that better fit your gaming style, for example, a ranged combat based band, or a close combat based one, or even a band full of spellcasters! You can also choose your Avatars of War simply based on the look of their miniatures. It is up to you!

New material is created monthly to enrich the game: new Avatars of War to join your band, beasts and ultra supporter groups, more scenery elements to spice up your arena, and new scenarios. These are just some of the things that take Arena DeathMatch beyond its rulebook.
Publicado por Sargento 100% Algodon en 1:23 PM